Beasts Ascendant (The Chronicles of the Cause, Parts 1 and 2)

A collection of six ancillary stories in the Transform universe (and associated with the series "The Cause").  Available through Amazon and Smashwords. 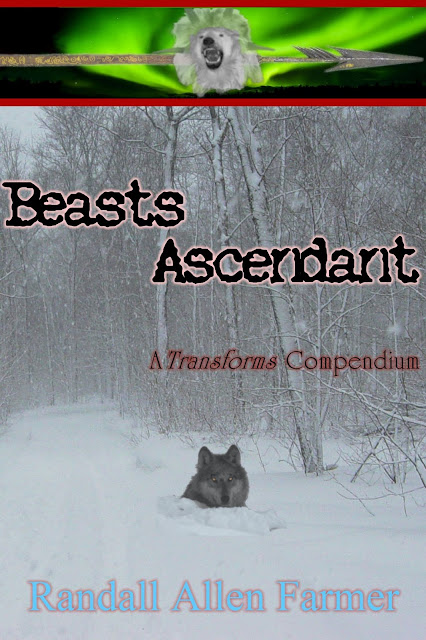 “We all know the man by different names,” the Madonna signed.  “Some call him ‘the troublemaker’, others ‘the agent’, others ‘the provocateur’.  We don’t know who backs him, or his game, but we do know him to be a threat.”  The man, Arm Amy Haggerty’s number one candidate for the Cause’s great unknown enemy, has influenced a great many events over the years.  His influences link these six chronicles and illuminate the growing hazards of the ever more diverse Cause.

The Hunters (Chronicle One)

A novelette following the exploits of Henry Zielinski during the Clearing of Chicago episode and his second longest visit to the Inferno household.  As always, putting Zielinski in with Inferno causes sparks to fly.

The Angel, The Hero and The Diplomat (Chronicle Three)

Dan Freeman recently transformed, getting him kicked out of his successful Army career.  He’s a Goldilocks, the rare variant Transform that produces neither too much nor too little juice.  In this short novel, Dan ends up getting sent to Focus Wendy Mann in Detroit.  He arrives in typical Detroit chaotic situation and precipitates what will later be known of as the legendary quest for the Eskimo Spear.
That is, if he survives an encounter with Arm Stacy Keaton’s Arm pack and Focus Gail Rickenbach, among others.

The Other Side of the Needle (Chronicle Four)

A novelette following Henry Zielinski as he attempts to cope with his transformation during the fight in Pittsburgh that ended the previous novel, “The Forgefires of God”.  Things do not go well for him at all.

The Madonna of Montreal sent Arm Carol Hancock, Focus Lori Rizzari and Crow Sky on a quest to bring the legendary (and still alive) first Chimera, Beast, back to civilization and to join them as a member of their family.  Doing this will bring a balance to Carol and Lori’s growing beastliness as well as provide them with a powerful ally in the upcoming war against the Hunter civilization.  In this novelette, we follow their journey north, in winter, to find Beast.
Carol, Lori and Sky discover legends can be a lot more dangerous than they imagined.

This novella follows Focus Gail Rickenbach on her rise to power following the events of “The Forgefires of God”.  What sort of leader is she?  What will she do with the power that’s been handed to her?  How will she cope with the growing menace of the Hunters?  Her choices will impact all the Transforms in North America.