Three more tales from the 99 Gods: War universe.  The first, set a thousand years in the past, tells of the origin of John Lorenzi.  The second is tells the story of Jan Cox (of the Indigo) and her adventures between her so-called death and her reappearance (as seen in 99 Gods: Betrayer).  The third, set about a decade earlier, tells the story of how Vanessa became Nessa.  Available through Amazon and Smashwords. 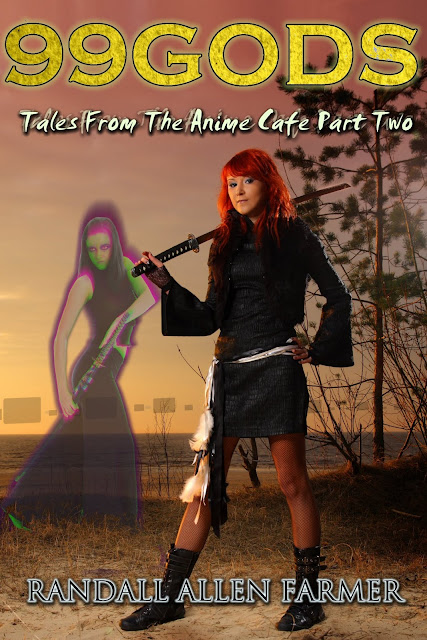 “Tales From the Anime Café” (part two) includes three stories from the 99 Gods universe.  These tales can be considered as side stories, back story, or stand-alone stories set in the same world as the 99 Gods trilogy.
The first, “The Cordoba Solution”, is set roughly a thousand years in the past.  This novelette tells the tale of Johannes De Lorenzi and struggles with being a magician, and how he brought his unwanted magical abilities under control.
The second, “Being a Myth”, is a long novella about the adventures of Jan Cox after her so-called death while defending her people from a group of Dubuque Supported (as seen in “99 Gods: Betrayer”) and her unexpected appearance at the end of the book.  Told from Jan’s point of view, this story tells of her adventures in another timeline and in Hell.
The third, “The Death of Vanessa”, is set approximately a decade before the appearance of the 99 Gods, during the time period Nessa Binglehauser is known of as Vanessa Luck, and she’s working as a private detective for Ken Bolnick.  This long novella is a story of insanity, change, and the dangers of Telepaths gone bad.